A Near Dawn - Dark Humorous Adventure

A Near Dawn - Dark Humorous Adventure 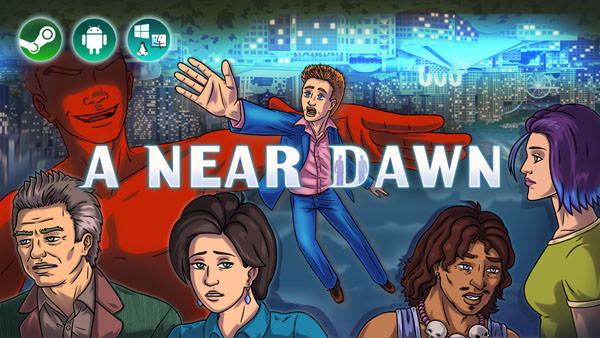 The project I am currently working on is a cross between point and click adventure and visual novel, called A Near Dawn. It is a dark and humorous adventure with psychological, supernatural, and science fiction elements that unfold as the story progresses. I do the writing and most of the artwork for it, and it has been a lot of fun working on it so far! If you would like to check it out, I released the Prologue in English that you can find for Windows/Mac/Linux/Android on Itch.io / Steam / GooglePlay (Android).


When Seattle-based attorney Sam Nichols, a victim to some disturbing psychological difficulties, takes an important new case, he finds himself exposed to progressively dire circumstances that threaten to unravel his reality and destroy those closest to him. With his mentor's firm on the brink of collapse, Sam will have to take on a ruthless multinational corporation defended by some of the vilest people you could imagine. The odds already seem out of favor, but you will soon learn that things were never as they appeared - as an even deeper conspiracy begins to emerge. Where will you find yourself if you keep untangling the threads to this mystery? You must be brave to uncover the truth!

A Near Dawn is greatly inspired by traditional Point & Click Adventure games, and inherits some of their wit, humor, and even interface, compelling you to navigate both the internal and external darkness that threatens to consume our protagonist at your own pace.

I do currently have a Kickstarter Campaign running for A Near Dawn, in hopes of getting support to continue the story. But with just over 50% and a little over a week left, it will need much more support to reach its goal.  :/

I hope you can check it out and let me know what you think!

Simon asked what software I am using for this game - it is called Ren'Py. Some of you may be familiar with it, it is a Python-based scripting program that was designed specifically for making Visual Novel type games. It's quite popular these days and gives you a good amount of freedom.

Also, I am not an expert programmer, and I find Ren'Py to be very manageable with my level of skill (and there is a nice community of people who can help you if you are stuck on anything).

As for the artwork,  I use Photoshop and MangaStudio, and I plan all of my animations out in Flash before transcribing them into Ren'Py.

Nice work, nice art, nice trailer, nice post ! Thank you so much for sharing that ! Best of luck with your kickstarter friend. I would love to see that project coming out !

It's good to know that Ren'Py can do so much!
Last year I wanted to begin a small project of visual novel and I was said to use Tyrano Builder instead of Ren'Py, because Ren'Py was "missing useful features" (that's what was said to me). But Tyrano is not free! So when I see what you did so far with Ren'Py, I have no doubt anymore that it is a very good soft.

You've done a lot of work in A Near Dawn. The characters are well done. Maybe the coloring could be improved a little bit, but this is a difficult part, and also mainly a matter of personal tastes. I don't know, in fact. The colors are very well chosen most of the time. Maybe it only lacks a tint (general color) to add to the ambiance of the scenes? Or it is just too much solid colors, and lacks of matter? (I love it when it's done with traditional tools like watercolor or pastels). For example the colored sheets of Naoki Urasawa, or in this example Jiro Taniguchi:

You could try a final "post-process" effect with a soft like Fotosketcher. I don't know what it would do...
You have talent, it's a shame if people are not convinced just because of personal tastes.
I would not be able to do 1% of what you did here!

How is the kickstarter going? I see that you have funded more than 50% and still 7 days to go. There is still hope, don't give up! We were still far from the goal at the same period. A lot of things happened during the last 48 hours...

I'm not a fan of 2D games but the project looks really nice. I hope you are successful in the Kickstarter campaign.

I have to be honest, this is not a style/type of game that I enjoy.

That being said, I very much appreciate the effort, skill, and commitment involved. I fully commend you, and wish the best for you in all your efforts.

I wish you the best of luck as well! Despite genres or differences in taste I always respect and support anyone who is passionate about their work

Sorry for the late response, it's been a very busy few weeks.
Our Kickstarter wrapped up at 76% ~ we didn't quite reach our goal, but I really appreciate the support! 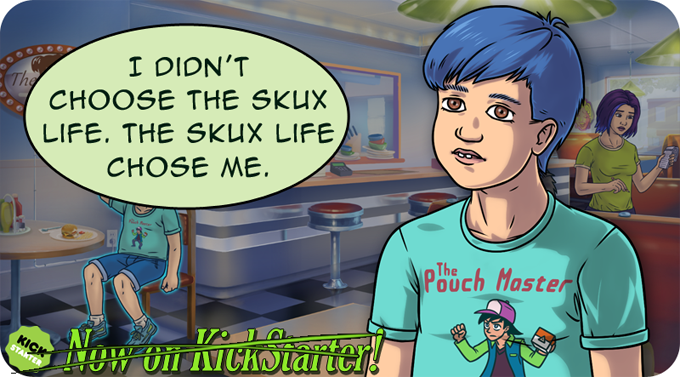 I would definitely recommend Ren'Py to start out with if you wanted to make a VN (it's pretty easy to pick up and there is a great community around it if you get stuck on anything (the creator himself is super active and is usually the first one to help solve your problem)). Everyone I have heard of using Tyrano Builder (except beginners) said that Ren'Py was more flexible and gave you more customization.

-  4 years of fine arts.
You have good taste in manga, Simon! Naoki Urasawa is one of my favourites! I used to be really into the illustration and colour use of Obata Takeshi (Hikaru no Go, Death Note). I think everyone has their own style, I'm sure mine is still evolving - it already greatly changed and improved from what it was when I first started this project.

I just wanted to say that I'm sorry you have not achieved your goal in Kickstarter, it's a shame... but you should not lose hope, sometimes failure does not mean losing, it means learning and continuing.

And of course if you want to share anything here we will be happy to know more about the project and its progress.

Hey Leon,
I've been busy as always. Don't know if I replied to you, but I'm sorry too that it failed. I did what I could to support your project but I'm not a very famous guy with a lot of contacts.

If by chance you wanted to continue A Near Dawn, let us know if we can help in any way!

I think we'd be happy to welcome you as a Friend of the collective if you decided to apply officially, which could allow you to access new parts of the forums.

Of course, I'll take a little break and see how things go in a bit.

Yes, unfortunately, none of us that are starting out are very famous.

Sure, I don't know how to 'apply officially', if there is a special procedure send me a private message about it.

Leon I have sent you an email about this. Let me know if you didn't receive it. There is no need to hurry however, so please take your time.